Back to Blog
ZenSupplies Blog 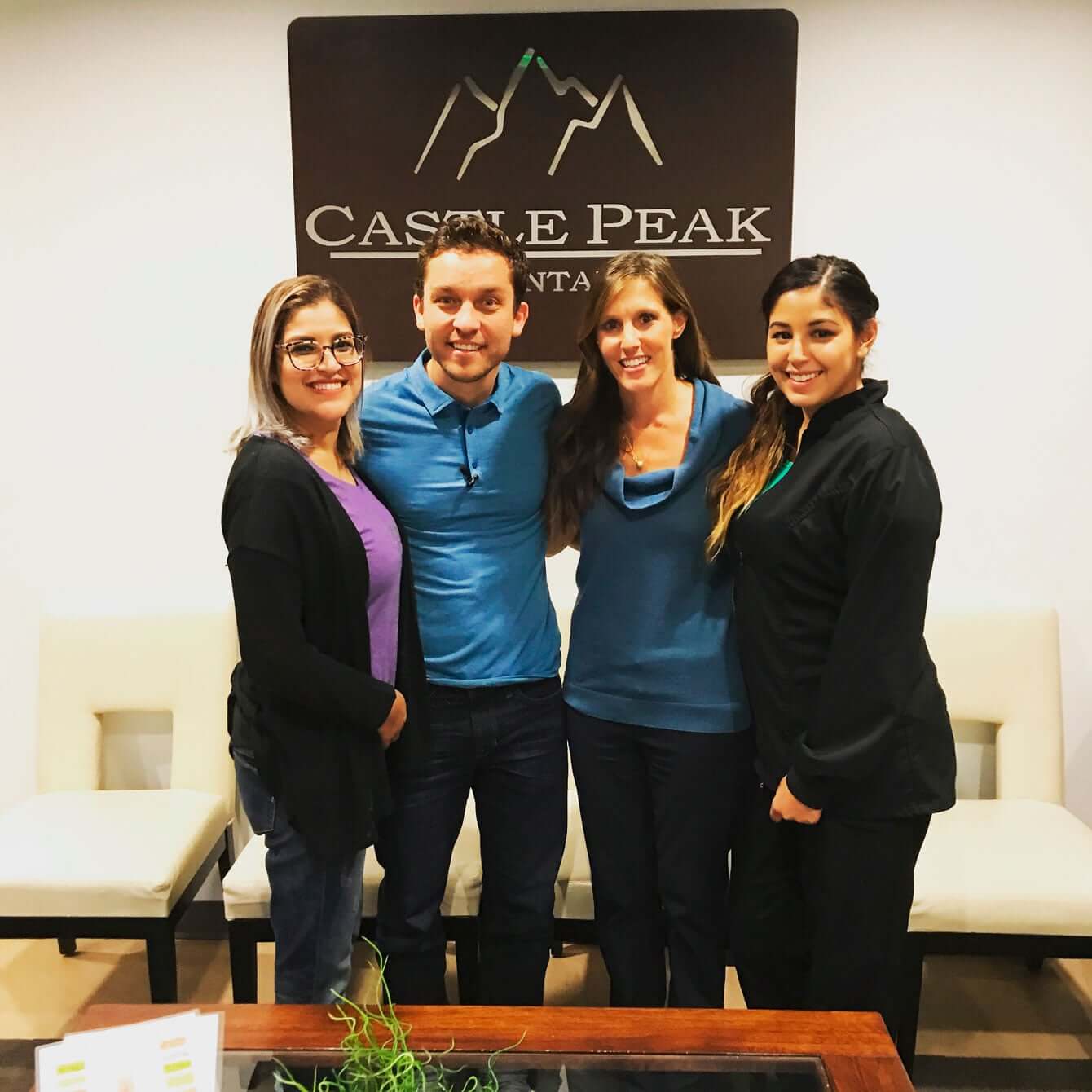 ZenSupplies is a lifesaver when implemented and the entire team is on board. In order to understand what does it really take to implement Zen the right way and also provide true feedback from the “trenches”, we decided to interview one of our most successful lead dental assistants Brittany Lopez from Castle Peak Dental

Tiger Safarov:                       Yeah, Dr. Summer always tells me about you and she’s like I don’t know how I can survive without Brittany and I believe that’s absolutely true even when I visited you guys, which was probably way too long ago. I need to come back. You were really on top of things.

Tiger Safarov:                       That’s true. Well, Brittany let’s dive into this, because what I really want to get into your mindset and how do we present this to the Doctors. So, let’s just say when we’re starting up an office, one of the big questions or worries of Office Managers and Doctors is how the team is going to react to it. What’s your take on this? What’s the best way to present it? How do we flip the coin so that the Doctor’s know how to talk to their team about Zen?

Brittany:                                  So, it all just comes down to managing your overhead. I mean, a lot of offices, their team isn’t as involved and overhead percentage and keeping it as low as possible as, maybe, some other offices but, you know, in order to gain bonuses and, you know, make your time there worth it, you have to worry about that kind of thing, right? So, in our office, for example, I’m the person who’s responsible for making sure overhead is low and if it’s not and there are not people contributing with that, then nobody gets a bonus and I feel like that’s a huge incentive for people, don’t you think?

Brittany:                                  Oh, oh, yeah one-hundred percent. I mean, yes, the dentist are providers as are hygienist but if you’re, like, the leader of the back office and, you know, responsible for ordering supplies you’re just as important. It’s your responsibility to make sure you’re getting the right costs, the right percentages, all that stuff in order to function well as an office.

Tiger Safarov:                       That’s so true. So, back to that same question. If Dr. Awesome is about to sign up with Zen, and we call him Dr. Awesome because they’re signing up with Zen. What’s the best way for them to present it to their team and say, like, do it during the morning huddle or what would you say from your standpoint. How did Dr. Summer Kassmel present it and how would you suggest for other doctors to do it?

Brittany:                                  Well, she made sure she had enough time to really explain the system and the importance of it during a team meeting where we actually had the time to discuss it and she basically just said, you know, like I touched earlier, overhead’s important if you want that extra cash in your pocket. If you, you know, to function smoothly as an office it’s important to make sure our supplies are low enough and are running smoothly and with Zen, which is so awesome you’re absolutely right, it’s just a place where you can make it easier, you know. We have our budgeting on there.

Tiger Safarov:                       Mm-hmm, right there. Let’s take the next step. Let’s just say you’re the lead dental assistant. You’re pretty much; you and I are setting up Zen. We’re going through this whole product inventory and then we get to the point where I say okay Brittany so now I’m going to give you homework. It’s going to be- not moving forward but your homework for the next training to add quantities and you’re like “uh-oh, that’s an extra step on my plate that I’m not sure if I have time to do.”

Brittany:                                  You know, you’re right it is a bunch of work on the forefront. That is dedication and making sure you have enough time to do so and I think that’s where your other team members and dental assistants, you know, I guess it depends on the size of the office and how many you have but that’s why the team works together to give you that time to do the quantities and figuring out the inventory. That’s the only way I feel like you can get Zen to work in the first place is if you figure out what you have and how much you need. I mean for me it was more so doing it on my off time, you know, unfortunately because I didn’t have the time to do so but, I think that’s a great opportunity for other assistants to work together to figure out what’s best and that’s why we have Dr. Kasmel helped because like you said she’s my right hand but it’s definitely worth it once it’s figured out.

Tiger Safarov:                       Mm-hmm, mm-hmm, okay. So, did you guys have anything, like, you know for example you sat down with a team and said okay guys in order for me to set up Zen, I need five-six-seven hours and by the way, that’s another question? How long did it take you to get all the quantities into Zen?

Tiger Safarov:                       Okay and so, how did you guys approach it when you sit down with a team and said hey guys I will need an hour or two a day to work on this. Can you guys cover me up on certain procedures or what was the discussion like?

Brittany:                                  I definitely think in the beginning to implement it into the team I think definitely having the doctor have your back or whoever it is ordering whether it be the lead assistant or whoever, having your back and letting the team know, like, hey, this is their system. This is why it’s important. This is what we’re doing and then just being able to set the budget, obviously. Dr. Kassmel is very hands-on when it came to budgeting, kind of finding the lowest prices and then once it was all set up and all said and done she, kind of, just left it in my hands to, kind of, just play with and figure out and now, you know, its like second nature to me but in the beginning she was one-hundred percent involved in every single piece of it.

Brittany:                                  I did it daily because I didn’t want a few days to go by or it be the end of the week and then somebody forget or it just-I felt like it’d get tossed to the corner and then it’d get left behind so I made sure it was a daily thing and then on the little I-Pad that we the Zen out app on, I put super simple instructions on how to Zen out so that a front office person or a hygienist who has no extra time, it literally- and I timed it, it literally took like a minute if not a minute and a half for them to log-in, Zen out what they needed to and then move on with their day. 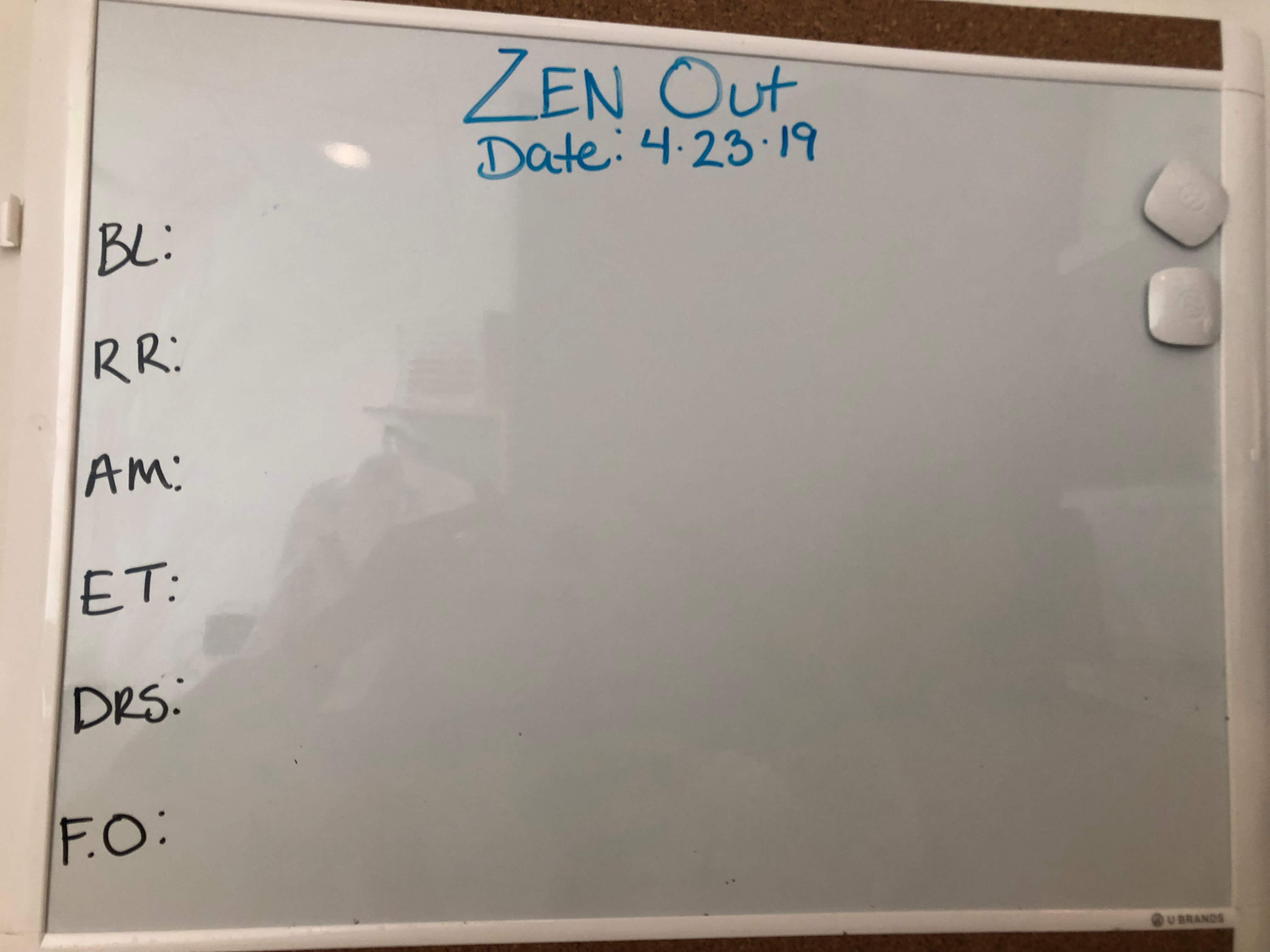 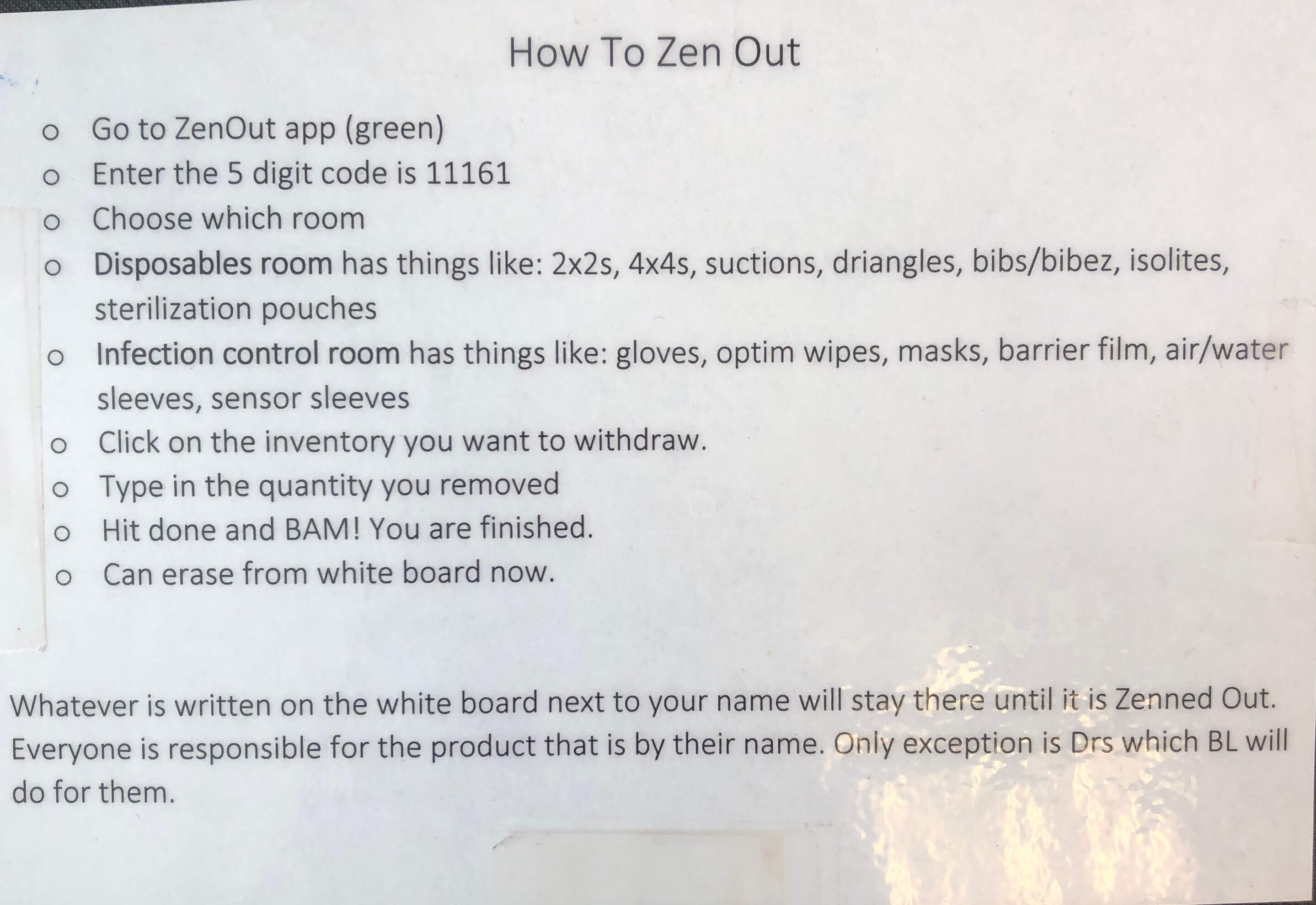 Tiger Safarov:                       Alright, so probably as we’re wrapping up one of the last questions is for us at Zen when we think about the valid that we bring to dental assistants, like, it’s great that there are a price comparison and budgeting and that you spend less money on dental supplies but one of the biggest things for me personally is the time. I love to think, or I tend to think, that with Zen essentially you’re spending less time managing inventory and taking control of the inventory.

Brittany:                                  Oh my gosh, it’s one-hundred percent true and I can definitely say my time spending with Zen as opposed to when I used to order is cut in half. I order bi-weekly and before I used to have to put a block for, like, two hours to, like, stalk everything, look through all my inventory and then order from like I said different websites, different companies and with Zen it literally only takes me like half an hour if that because I know what I’m low on. I know what I have to order. I know the lowest price and it’s in one spot. Zen is like a lifesaver so thank you so much. I love it.

Tiger Safarov:                       Wow, that’s awesome. I really appreciate it, it means a lot. I just really wanted to get that honest feedback from you because I know you’re always honest and it’s, like, truly the impact of Zen and if we’re moving in the right direction because like I said my biggest thing is time and it’s the only thing we can never get back and one thing I want to strive for is for our assistants to make sure that you guys don’t waste time on just things that don’t matter.

Brittany:                                  Oh, one-hundred percent and I think you guys are doing a great job with what you’re offering and I think any kind of office or assistant should definitely use Zen because like you said it’s a time saver more than anything. Like the price comparison is amazing, don’t get me wrong, but, you know, to have that time to be able to do your other duties or just assist I think being able to use Zen and do it that quickly, as long as its implemented right, then I think it’s just amazing.

Brittany:                                  It would definitely be, be patient with it because I know in the beginning it may feel like its tedious just putting your distributes in one spot and your inventory count and, you know, quantity and all that but just making sure the team implements ZenOut because if you don’t do that or, you say, forget or your team’s not on board then it puts more work on whoever it is ordering. It makes you have to go back and re-count your inventory and it’s just making sure the team implements it just as much as you first and foremost and then you just have to mess around with it. I did a lot of research on it playing around with it and just finding quickest ways and distributes you can to make it that much easier and quicker.

Tiger Safarov:                       Yeah, like, from day one I knew that you guys were going to be awesome, you know. I can definitely say you’re one of my top five’s, that’s for sure and it’s so much fun too. Even I know when you go into the chat and ask some questions because when I go back and I listen or I look at the chat messages I know there’s going to be some gold there because when you ask questions its probably something we don’t have as a feature that we need to look back and maybe build it, you know. That’s how I look at it.

Tiger Safarov:                       It means a lot. Well, keep doing that. Alright, so, thank you so much. We’ll be wrapping up and this episode will be available on our blog so subscribe it and Brittany I probably am really clued- I’ll just see if anyone has any questions for you if they want to reach out to you I’ll just ask them to reach out to us first and we’ll coordinate it so you don’t get bombarded with questions, okay?

Back to Blog
Recent Posts
Posts by Topic
Newsletter

Sign up for our newsletter to keep up with our serviced and best practices for the dental industry.